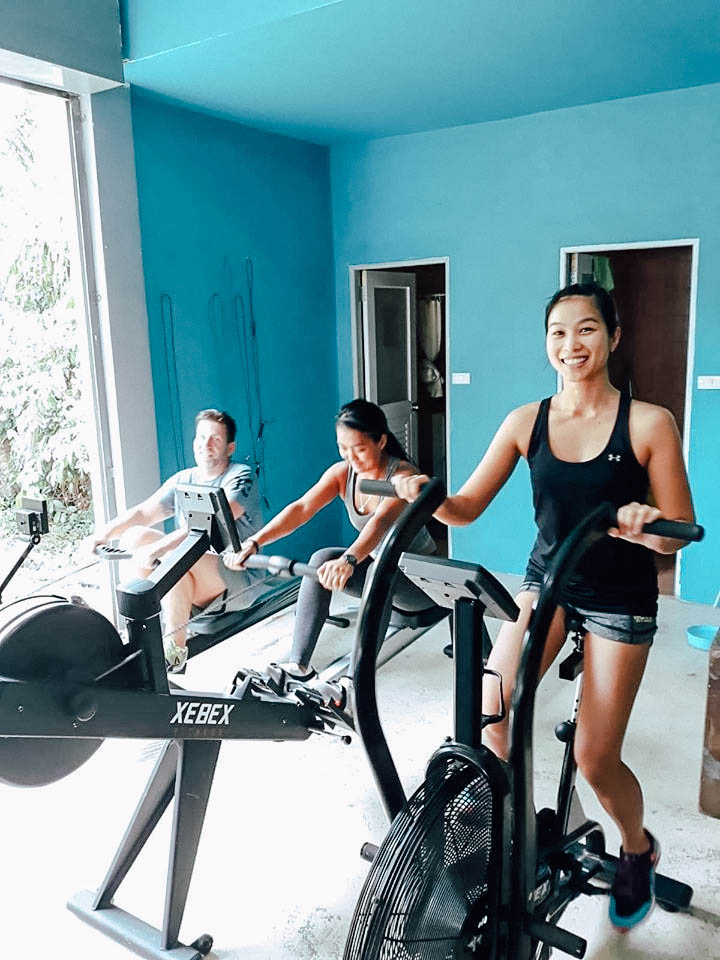 Hi there, my name is Taiwaree, you can call me Pam. It's been for a while. I am writing here to share my health, relationship with food and fitness story.

In 2012, back in Bangkok I worked in an analytics team with a market research company in the financial district (sathorn/silom area).  6 months later my ex-colleagues and I started running in the lumpini park together with Markus, my boyfriend (now my husband). In fact, I didn't like running but I wanted to prove to myself that I could do it. So I kept practicing it almost everyday. I joined a quarter marathon for 3 times. And that's it. My running journey ended when I discovered wakeboarding. 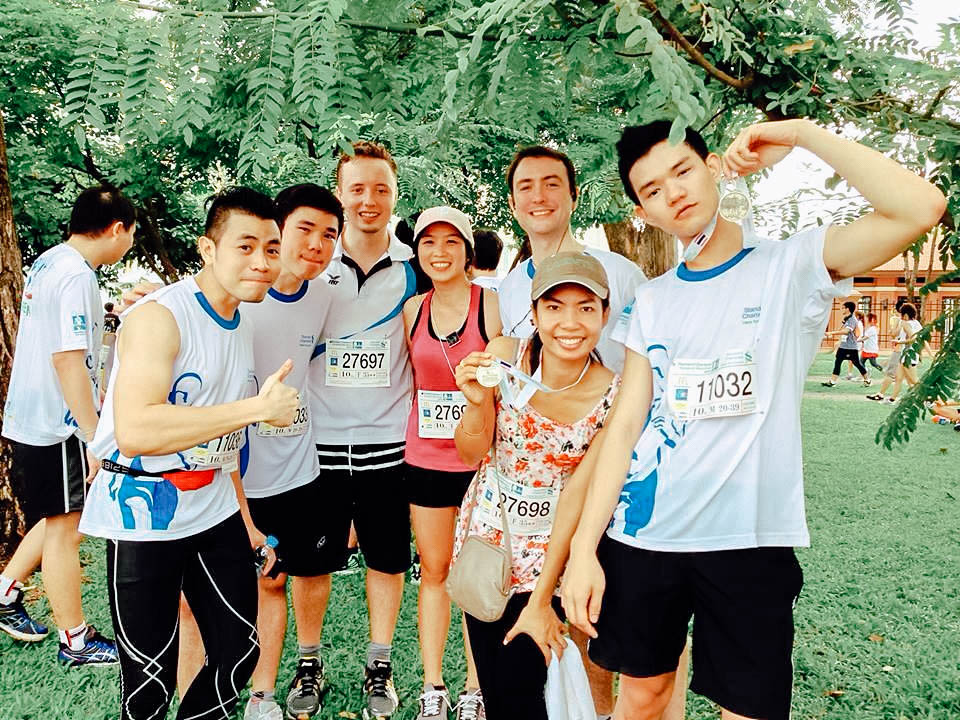 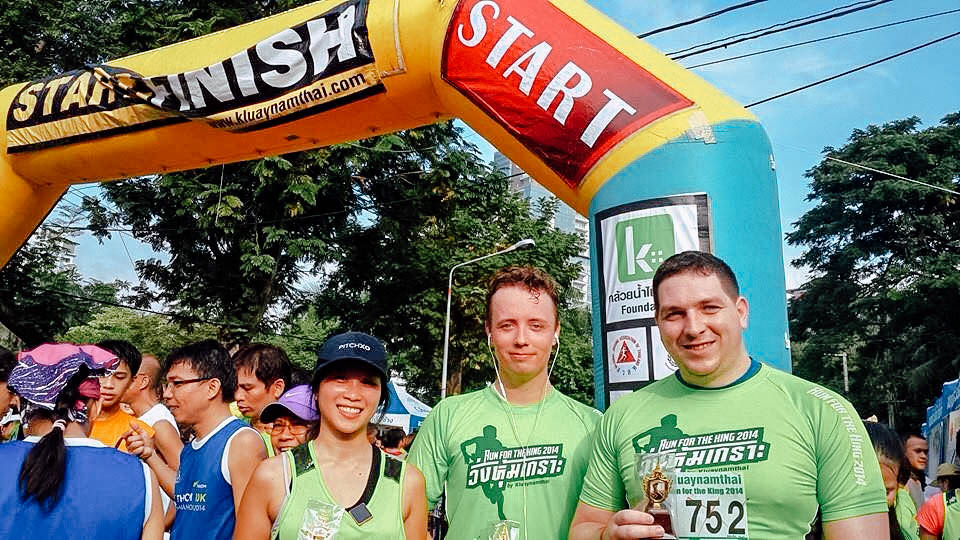 Run for the King, Quarter Marathon 2014 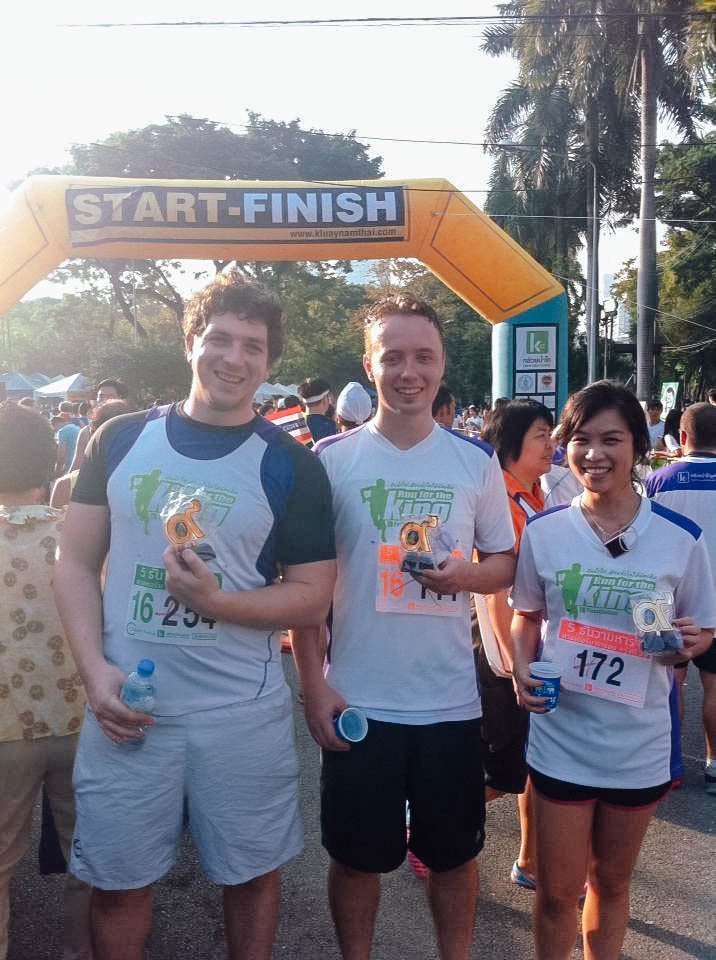 Run for the King, Quarter Marathon 2015

In 2013, one day my ex-colleague, Jake invited me and Markus to try wakeboarding at Thai Wake Park.  It was so tough at first. As a kid, I wanted to be a surfer girl. So I imagined myself doing wakeboarding.  We kept practicing for one month. Markus could stand on the board and ride it without any problems while I still had a hard time standing on the board.

In May 2013, we went to Black Mountain wake park with our friends. I finally could stand on the wakeboard and make my first round.  That was how my wakeboarding journey began. Since then, we went wakeboarding with our friends very often. Every weekend we drove up to the wake park and sometimes we even slept at the hotel over there. Like "Eat Sleep Wake". 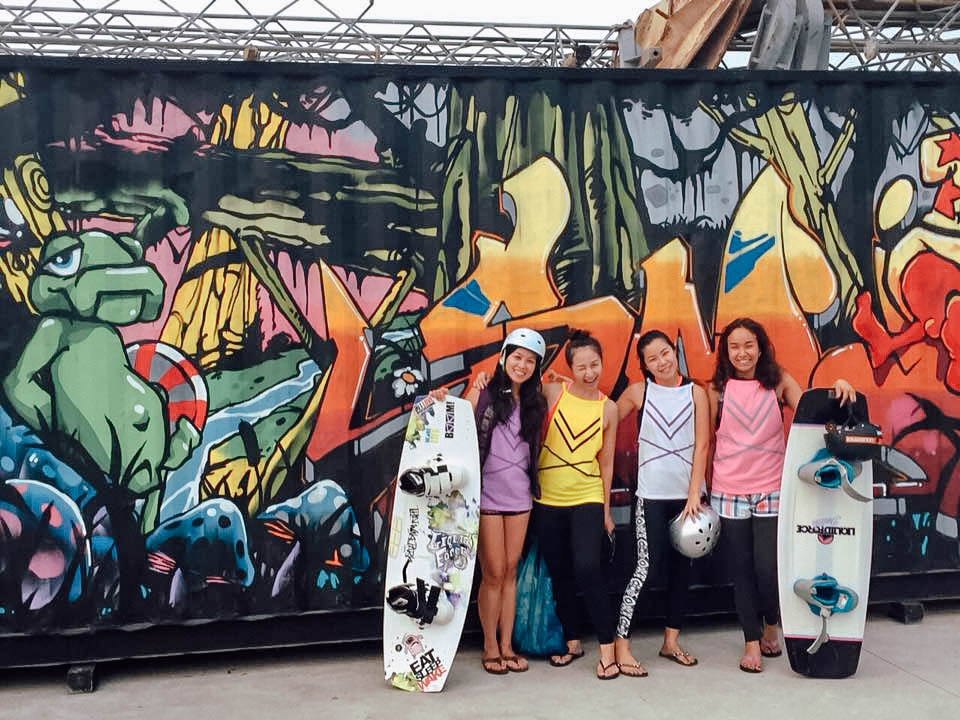 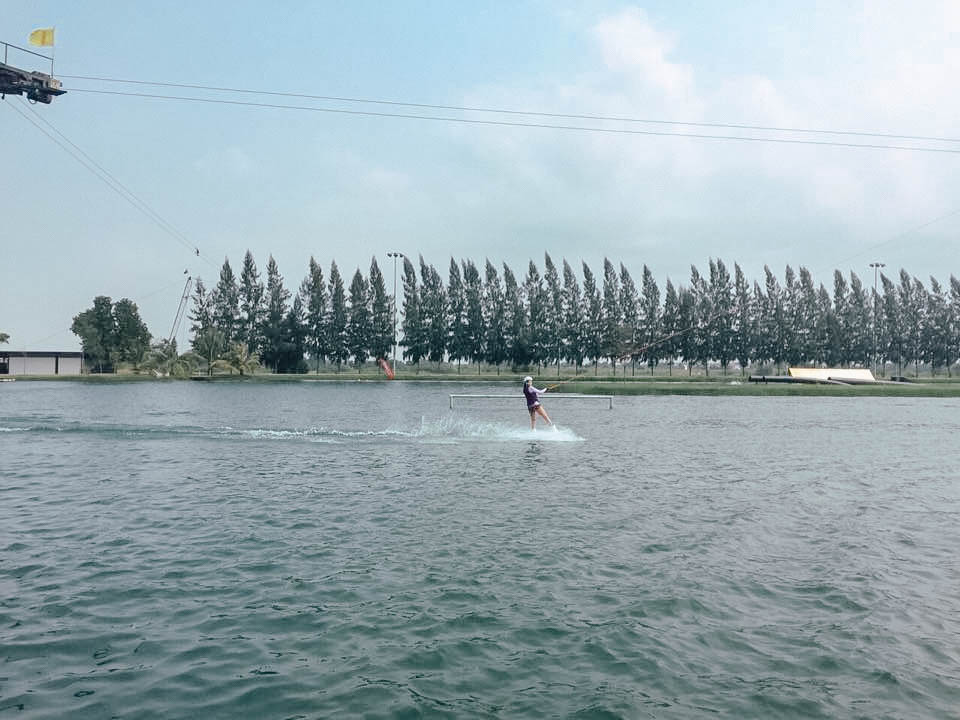 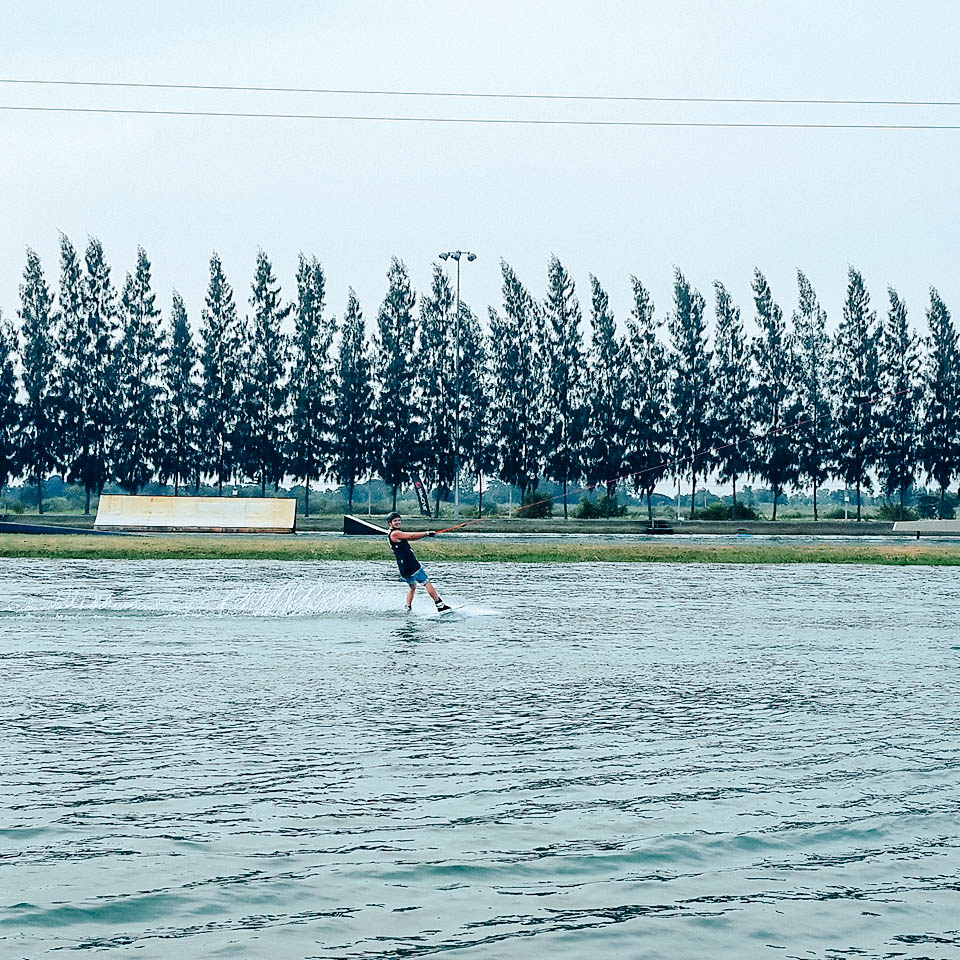 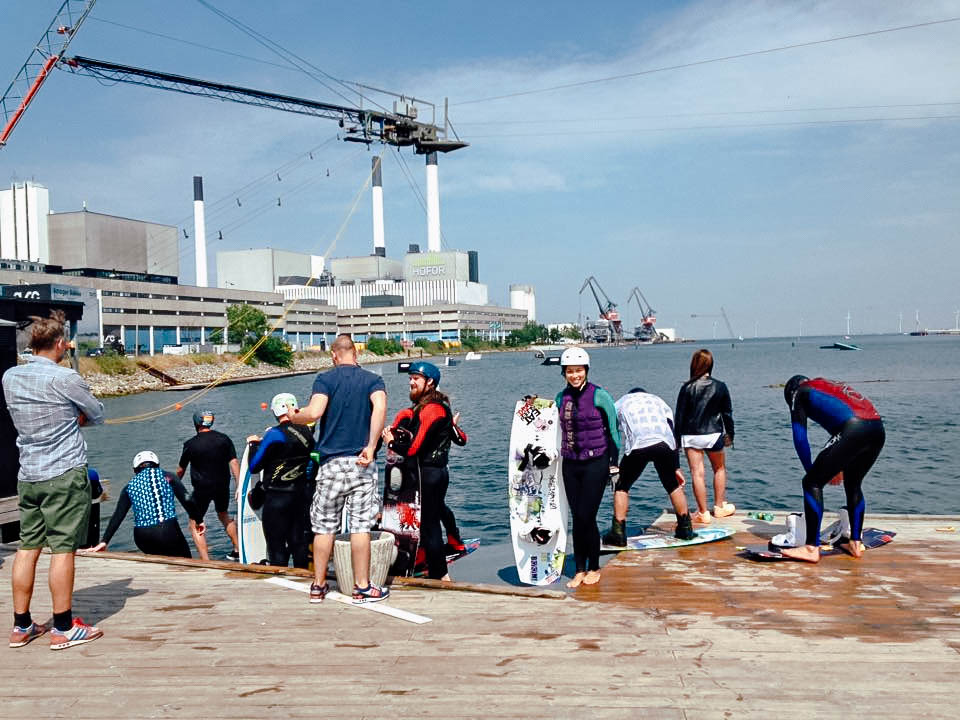 In 2015, we were planning to get married. We went wakeboarding less often at that time due to our work and busy planning on our wedding. One day I talked to Markus that I wanted to get into fitness again. We went to check out the gym near home and yoga studio.  I chose to do yoga over gym. First of all, I really liked the teacher at Roots8 yoga, Kru Vivek. He is the best yoga teacher for me. Also, yoga helped me to become stronger, more calm and a happier person. 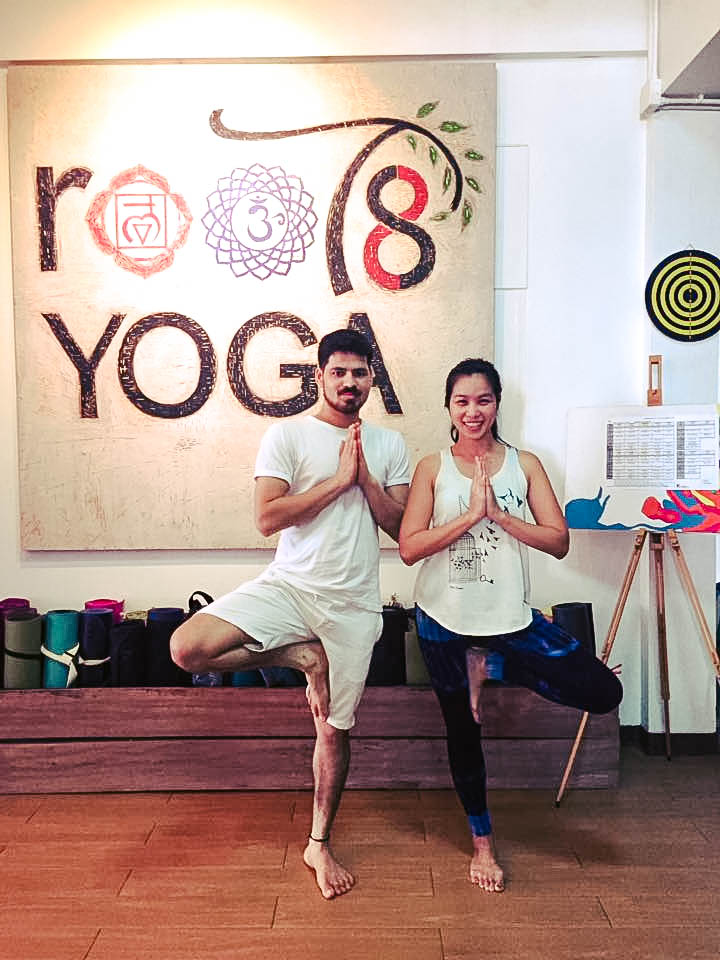 I got used to cook my own food since I lived alone in the US. When I came back to Bangkok, I also cooked a lot too. I cooked healthy food and not so healthy food, basically any food that I want to eat. When I started running, I started eating healthier but still on and off.  There were some moments that I wanted to eat korean bbq, junk food and so on.

In 2017, Markus and I moved from Bangkok to Koh Samui, Thailand.  I still kept doing a lot of yoga. I began to monitor on what I ate more closely than I did before. I guess it is because Koh Samui has healthy and fitness vibes. Back then I didn't keep track my protein and carbs intake. I thought it's ok to eat any healthy food. Well, as long as it's healthy, why not???  I wasn't fat. So why so serious? 😀 haha

In 2018, I was a pescetarian.  One day we drove from Bangkok to Koh Samui, and followed the truck that carried the cows to the slaughter house.  It was raining very hard. The cows were super wet. It hurt me in the chest. Like Poor them, they were going to die. And plus I watched a movie called Okja. so I told myself, when I came back to Koh Samui, I will stop eating meat. And I did for one year. I still maintain eating healthy food and cooking my own food as well.

In January 2019,  we ate healthy food and cheat meals (not strict diet).  Also, I decided to add pork and chicken back to my diet slowly again.

In March 2019, I started having a stomach problem for 2-3 weeks. I couldn't eat so much. If I ate something, it couldn't digest properly. I burped and had a stomachache. I went to see the doctor in Bangkok. I did an ultrasound and gastrocopy for my stomach. The result was good. The doctor said inside my stomach looks fine.  I was like but why I had a stomachache. She said I had GERD gastritis. She suggested me to change my diet. Eat 3 meals per day. I should eat soft food until I feel better.

Markus did his own research that eating banana and pineapple in the morning will relieve my stomach issue.  I ate fruits and probiotics yogurt or soup as my breakfast until I got better. Then I started eating eggs with a little bit of dark bread again.  I actually reduced rice from my diet. I noticed that since I ate brown/rice berry less, Gas in my stomach has reduced. Also, my stomach digestion got better. (It really depends on your body, if your stomach can handle digesting brown rice, you should eat it.)

I love eating brown rice or rice berry but sometimes I eat it more than what my body needs.

I did not only eat less rice but also ate less pasta, dark bread, less beans and legumes. Basically I ate any food that made my stomach discomfort less than before. (Poor me)  Since I got better from my stomach pain, I began to eat more whole foods. Healthy food is very broad. When I think about healthy food, I think about good food that don't harmful to my body. (rice, vegetables, brown pasta, dark bread, grains, beans, legumes, fruits, etc.)

Changes I made about my relationship with food:

Here is an example of my meal plans, since the end of March 2019:

(I sometimes have 2 breakfasts if I just drink a smoothie in the morning.)

I usually eat a snack in the afternoon.  Sometimes when I crave for something after breakfast, I would eat a snack.

I had to change my diet because of my stomach issues. Later I really enjoy planning my meals and cooking more.

In November 2018, I drove back home from yoga studio but I still felt like I had so much energy left in my body. So I texted Markus. "Baby I'm going to CrossFit."  He was super surprised. Haha Because it is totally different from sports that we are used to. It looks crazy, when we looked at other people do CrossFit. Like we would not be ready to do this sport. Haha When I came back home from my first CrossFit class at Lamai Beach CrossFit, I was super hyper. I said to Markus, "Baby, Omg it's different. It was good. I think I'm going to sign up for a monthly membership."  In early December, I went to CrossFit around 2-3 times a week and still did yoga.

In December 2018, I had a bladder problem. So I couldn't do CrossFit as often as I planned.  During New Year's Eve, Markus and I went to our friends' wedding in Vietnam. The night at the wedding, Markus suddenly got down on his knee and proposed to me "Baby in New Year, I will go to CrossFit with you."  The camera guy at the wedding thought he proposed me to marry him. He took a picture of us. Haha I was so happy and surprised by my beloved man. And I said him Are you sure? You don't have to, if you are not ready.

I've been training at Lamai Beach CrossFit for 10 months. When I got into crossfit, my brain also automatically changed about my relationship with food. Because I have been training really hard, I wanted to see my body transformation. So I really pay attention on what I eat. Well like I said, It's not only about the body transformation, but also healing my stomach issue.

The thing about me, when I do crossfit, I don't really compare myself to others (yoga mindset LOL), I keep doing CrossFit as much as I can. If I can't go further, I take it slow or stop it. (Sometimes it is hard to stop do what you love to do though, especially doing CrossFit.)  Another thing I learned from yoga that listening to your body is really important, when your body tells you that you should rest, that means you should rest. 🙂

However, I have a lot of patience. I don't give up easily. Later It became a CrossFit addiction which is good. CrossFit has changed my life physically and mentally. Some friends of mine asked me what CrossFit is, how to start or some said I am not ready for that. I recommend you to read the article on Lamai Beach Crossfit, I'm out of shape- Should I start CrossFit. 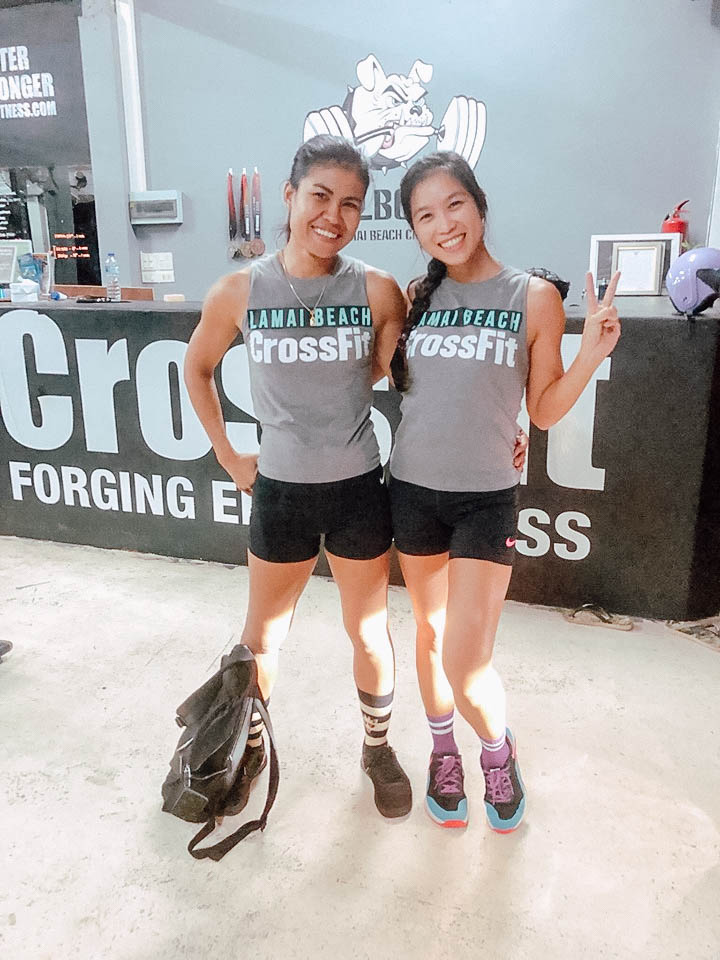 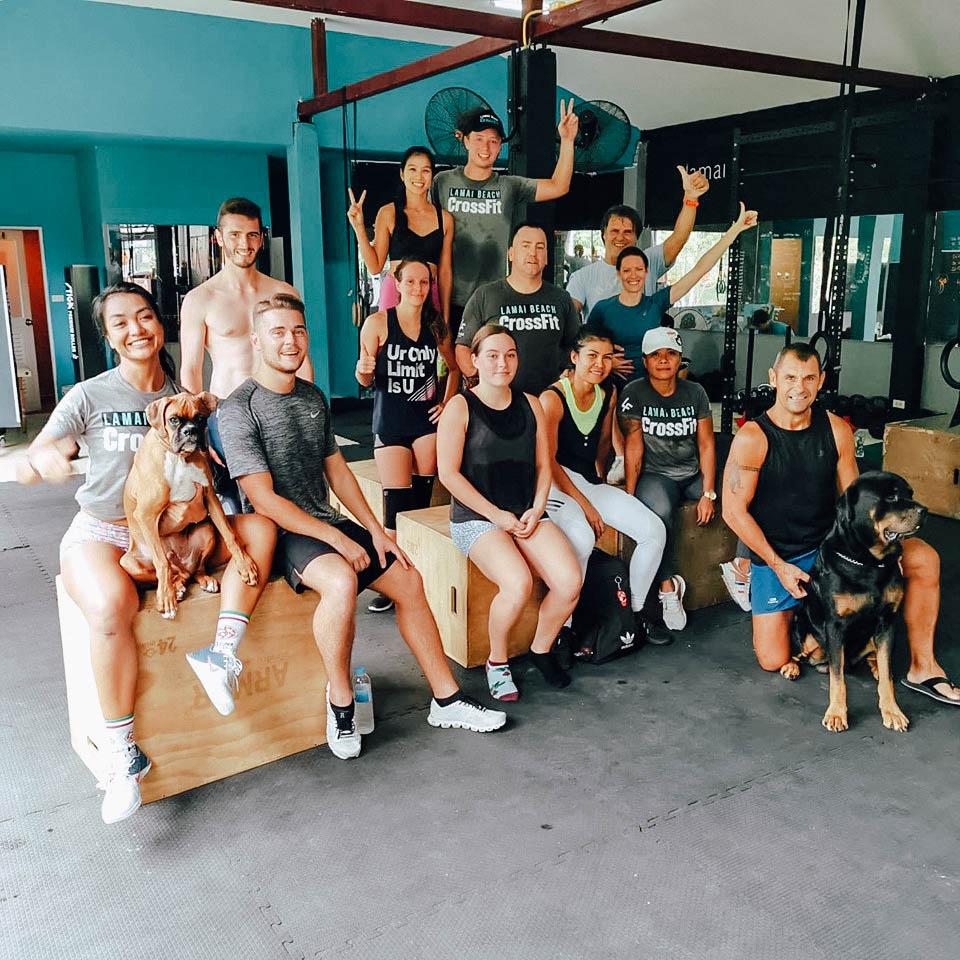 I couldn't recall when I started going to strength class.  At the start I was afraid to go to strength class, because I thought I wasn't strong and fit enough. Also, I didn't plan to become bulky like a bodybuilder. As if that would happen over night, haha

Strength training helps me to become stronger while staying lean. Also, I became more confident in my own strength when lifting weights. I had more time to focus on lifting a bar with the right posture.  However, In CrossFit, during metcon session, everything is fast. It is harder to be perfect on every repetition than Strength training. 🙂 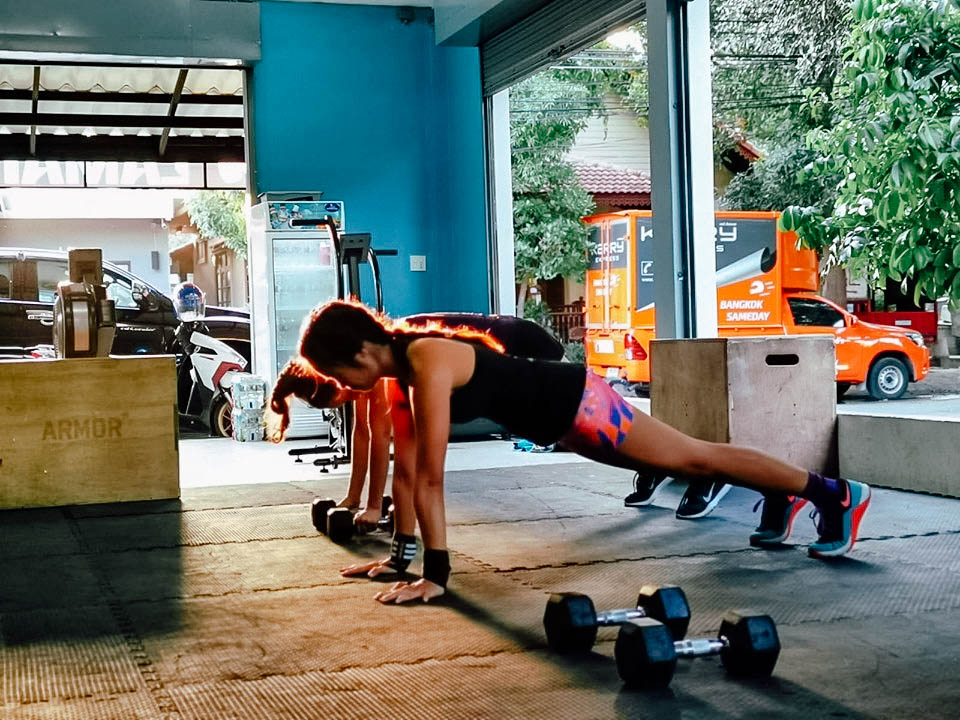 I go to CrossFit and strength training for 5-6 days a week. I do yoga once a month. I go stand up paddle boarding once a week or once every 2 weeks.

Changing diet and CrossFit have improved my overall health.

In my next article I will focus more on my fitness, my crossfit journey and the Samui Fitness Retreat. 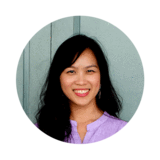 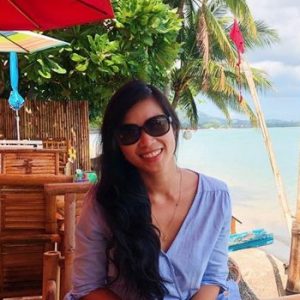 Hello. I am an ex-city girl living on the beautiful island of Ko Samui. I write about data, crossfit, wakeboarding and other Samui related topic.